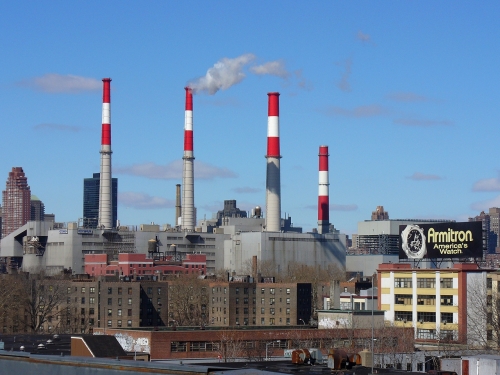 In 2012, Hurricane Sandy left over 2 million New York residents without power. But some, particularly in New York City, were luckier than others. The city may not have an abundance of wind turbines and solar power may not be the greatest option because of skyscrapers, but New York City does have one less-known energy source; steam.

In fact, NYC has the largest steam energy system in the world and when millions lost power during Hurricane Sandy, many NYC buildings still had power because of cogeneration, an alternative energy system derived from steam.

This video from the Pew Charitable Trusts sums up cogeneration pretty well. Basically, when power plants produce energy, a large portion of potential thermal energy is lost through smokestacks and cogeneration is the process of getting that lost energy back and reusing it.

To simplify, think of the process as a boiling pot of water. The water boils and steam rises. What happens to the steam? Nothing. It evaporates and it’s gone. What if you could somehow recapture this steam and use the energy to boil even more water? That’s exactly what happens with cogeneration.

Of Con Edison’s seven NYC plants, three use cogeneration to create steam and electricity for the city’s residents. Most older buildings have steam pipes that feed into radiators in each apartment. This completely eliminates the need for an individual boiler in each unit which saves room, energy, and money for residents.

In an article in Gotham Magazine, Con Edison representative Joe Petta compares the value of using steam over individual boilers to commuting, “Which is better for the environment, 50 people riding to the city on a bus or 50 people riding 50 different vehicles? The emissions from one bus will be less than the emissions for 50 cars.”

According to the Pew Charitable Trusts, most power plants have efficiency levels between 33 to 45%, but with the implementation of cogeneration this number can be boosted to 75% or more.

The seven steam plants in the city are successful in pumping out 10 million pounds of steam every winter day and heating NYC households, but creating more of these plants and converting old oil heating systems into steam is a difficult endeavor involving intense amounts of construction, and of course, lots of money.

Check out this graphic from Con Edison to see the complexity of what goes into maintaining the city’s steam distribution system:

The likelihood of expanding steam plants and implementing steam cogeneration is not the greatest because of this associated cost and complexity. But for the time being and with the resources available, the city is taking advantage of NYC’s steam secret to recycle energy and provide power to millions of residents, something that could keep the lights on should another disaster like Sandy strike again.